Several years ago our well caved in.  I must have some kind of mental block about that time because I had not thought about that well fiasco in forever.  But tonight as I was falling asleep, my sister-in-law texted a picture of me and Declan taken a few weeks ago during a worship service at The Elms Barn and it all came rushing back.

One minute we had running water and life was going on as usual and the next minute life was anything BUT usual.  It took some time to figure out exactly what had happened, and in the interim the basic necessities of a household came to a screeching halt.  Cooking, bathing, washing dishes and clothes, flushing the toilet and even brushing our teeth became work.  Small messes were big chores, and the water was allocated sparingly.  It was, simply put, a nightmare.   We purchased more gallons of water than I can even quantify and went to my brother’s house daily to shower, wash clothes and tubs of dirty dishes, and to refill the empty gallon containers.  I wish I could say that the well was repaired quickly, but it actually took months.  From the outside no one had any idea that the well - the source of ease and the fluidity of our home - had for all intents and purposes dried up.  The facade of our home looked like it always had, but inside?  Inside it was miserable,  exhausting, uncomfortable and needed a good cleansing.

I didn’t know the photographer captured this moment, but it is so precious to me.  I quickly put on my glasses and studied it.  I mean really studied it.  I wasn’t looking to see if every hair was in place or if my good side was captured.  If I’m being honest, it’s not the most flattering picture of me, but it is by far the realist.   It’s an amazing photograph that speaks volumes, but as is with most photos, you see what you want to see.   I saw a photo of a woman holding an incredibly adorable baby on her hip and immediately remembered that empty well.  I remembered how day after day and week after week I labored for water.  I remembered the frustration of not knowing when it would end, and I remembered how many times I wanted to throw my hands up and say I can’t do it anymore.  I remembered knowing the trial would eventually end and that I just had to dig deep to keep going, all the while hating that useless empty well and the hardships it caused me.

The woman in this photograph has felt like a useless empty well more times than I care to admit.  I was actually bone dry walking into this worship service, tired of the intense labor of navigating grief and the frustration of the days when the pain runs deep.  The facade, dressed and wearing makeup, which in and of itself is actually quite a feat, didn’t reflect what was and does actually go on inside the heart of a momma that has said goodbye.  Only He and other mommas know that torment. 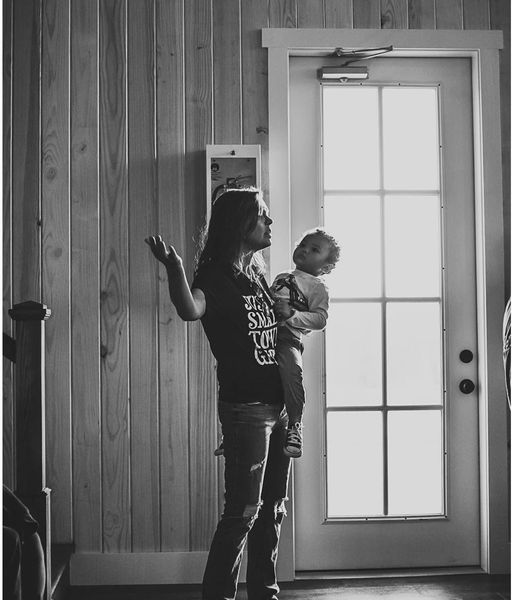 With that raised right hand I wanted my Father to do for me what I was doing for Declan.  I wanted him to pick me up and carry me.  To give me rest.  And He did.

Declan will one day outgrow my hip, but I hope that he, like his daddy, will stand next to me with his arms raised to the only One that can fill that well.